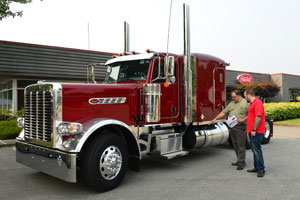 As one of Canada's largest Peterbilt dealers, Peterbilt Pacific's guarantee to their employees and customers is integrity. Across eight dealerships, 100+ service bays and two collision repair shops, Peterbilt Pacific is proud to sell and service the world's most desired trucks, while providing the highest quality of customer care. At all its locations throughout British Columbia, Canada, Peterbilt Pacific continues a long tradition of excellence, proven durability, and high truck resale value.

James Voth has been with Peterbilt Pacific since 2004. He started as a Service Technician at the Surrey dealership specializing in engine diagnostics and repairs. In 2007, James was a part of a Canadian competition that was held by Peterbilt Motors. The purpose of the competition was to accurately diagnose and find the fault that was placed in the newly released PACCAR PX engine. James came 3rd place in the Canadian region! He moved to the Shop Foreman position in 2015 and in 2017 was promoted to Dealer Technical Manager at the corporate office. He has come a long way over his career at Peterbilt Pacific. "Peterbilt Pacific has given me a tremendous amount of support in my career which has allowed me to be very successful." 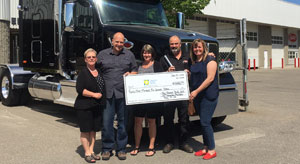 Peterbilt Pacific by the Numbers