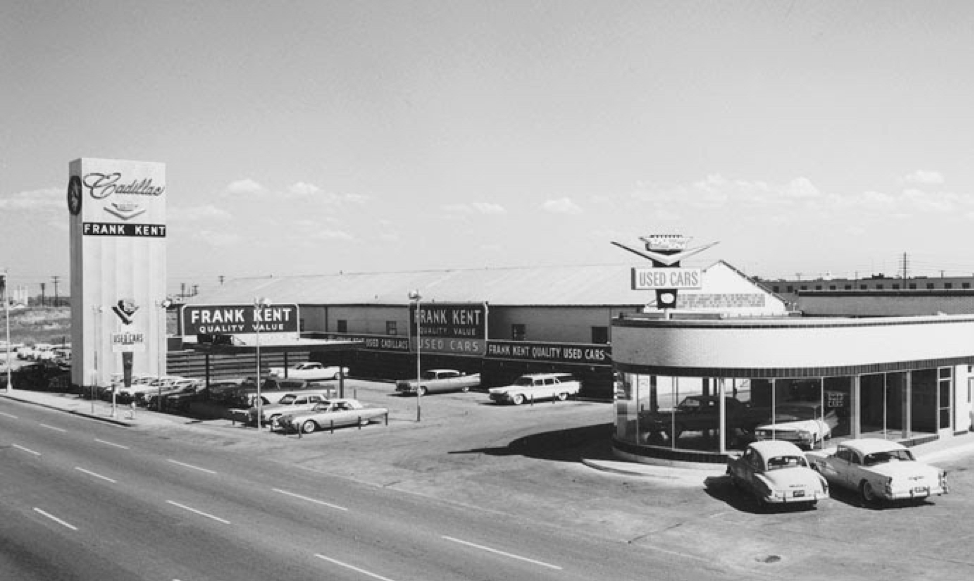 Frank Kent Motor Company is one of the oldest family-owned dealerships in Texas. The late Frank Kent's leadership in the automotive industry was one of earned respect. He stressed the importance of honest and reliable service. In 1917, Mr. Kent organized and operated the GMC Truck Company of Fort Worth. From 1919 to 1930, he owned Kent Buick in Lubbock, Texas. In 1930, Frank Kent returned to Fort Worth and purchased Earl North's interest in Webb North Buick and became Vice President of Webb Kent Buick Company. In 1935, Mr. Kent organized and operated Frank Kent Motor Company, a Ford and Lincoln Mercury dealership. In 1939, he moved his dealership from 7th Street and built a new facility at Main and Lancaster in downtown Fort Worth. In 1953, he obtained the Cadillac franchise/distributorship and gave up the Ford franchise. In 1967, Frank Kent Cadillac, Inc. succeeded Frank Kent Motor Company as the operating company with Frank Kent as Chairman of the Board, John Ludington as President, and Wendy Kent Churchill (Mr. Kent's granddaughter) as Vice President/Treasurer. Mr. Kent remained active in the dealership until his death on September 13, 1987, just two days short of his 92nd birthday. An honor few achieve in the automotive business was bestowed on Mr. Kent in 1989 when he was posthumously inducted into the Automotive Hall of Fame in Detroit, Michigan. Following Mr. Kent's death, John Ludington succeeded Mr. Kent as Chairman of the Board and Mrs. Churchill remained active as an owner and member of the Board of Directors. John Ludington retired in 1995 and Wendy Kent Churchill became owner and President of the Company.

In 1999, Ms. Churchill assumed ownership and became President of Frank Kent Auto Group. The Cadillac dealership and the Auto Group merged to become one company - Frank Kent Motor Company, the original name of the Company founded 64 years before. Ms. Churchill passed away May 27, 2005 after many years of battling illness, leaving a legacy anyone who met her will never forget. At that time, her children Will and Corrie Churchill, stepped into the role of dealers and today oversee all the operations of the Frank Kent family of businesses. Their guiding motto as the head forward is "Morals, values, and ethics over profit."

The Cadillac dealership, originally situated at 100 E. Lancaster in downtown Fort Worth, relocated to 3800 Southwest Boulevard in 1984. In 1993, we acquired the GMC, Pontiac and Honda facility located at 3535 Loop 820 S. In 2000, we were awarded the Hummer franchise, added the Buick franchise in 2005, and added the Dodge franchise in 2007. In 2004, we were selected by General Motors to be their ADI partner and handle North East Texas region.

During the years of organization, we have enjoyed a steady growth. We attribute this growth to the fact that we are a group of people working together as a team to render our services both in sales and service. Numerous awards have been bestowed on the dealership. Frank Kent Cadillac is in the Cadillac Master Dealer Hall of Fame in Detroit, Michigan. This status was achieved through high standards of automotive excellence in both sales and service. The Cadillac dealership was awarded the Dewar Trophy in 1989, an award given for outstanding achievement in all phases of dealership operation. Manufacturers have recognized us as leaders in customer service by bestowing upon us the Honda President's Award, Pontiac's Leader of Distinction award, and distinction of Cadillac Master Dealer.