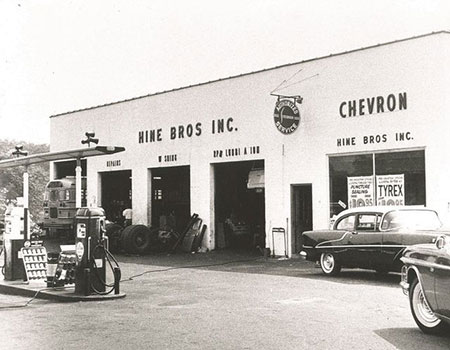 Hine Bros. Inc is a renowned and respected seller and servicer of trucks manufactured by International and Hino. As a company, we have continued to grow for the notable past 70 years due to our exemplary customer service and attention to details.

One of the original settlers in the Town of Southbury, the Hine family has played an active role in the Southbury community throughout the years. The generations who followed were taught the value of doing well by others and maintaining integrity.

"Our father, Richard and his brothers, James "Jimmy" and Howard Hine began the company following their return home after WWII," stated current second-generation managing owners and brothers, Ken and Jay Hine, and Jay's wife, Laura Hine. "Our dad and Uncle Howard served in the Merchant Marines while our Uncle Jimmy served in the Army Air Corps.

"When they returned to Southbury with no jobs, they bought a parcel of farmland from their Uncle George on Main Street and built a gas station with repair facilities. While the building has changed over the years, our company is located on the same land they purchased in 1947. The station started with Chevron gas and evolved into a Mobil station which is now the only full-service gas station remaining in Southbury."

The three original entrepreneurial brothers sold and serviced Studebakers plus a variety of models International Harvester offered along with Cub Cadet Tractors. When Howard moved to Florida, his brothers, Richard and Jimmy continued running the business supported by multiple family members over the decades. Ken and Jay grew up at the "garage" helping out as soon as they were old enough to push a broom. The second generation bought the business from their father and Uncle Jimmy in the 1970s.